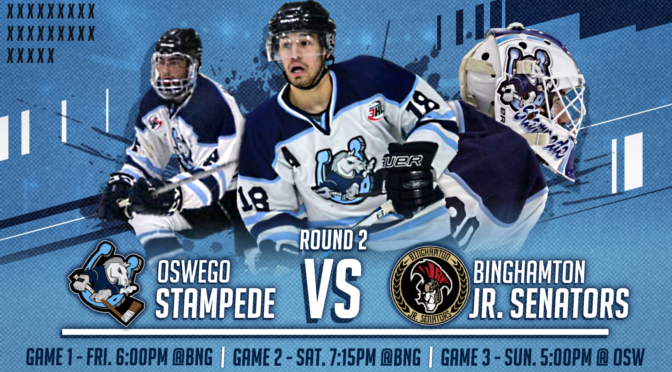 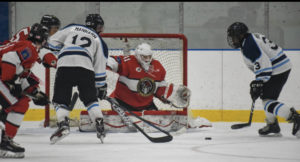 The NA3HL divisional finals are set for this weekend. In the Northeast division the Stampede will travel to Binghamton to take on the first place Senators at the “Ice House Sports Complex” on both Friday and Saturday. Friday the teams will face-off at 6:00 PM and Saturday puck drop is at 7:15 PM The two teams will then play game three if needed in Oswego on Sunday at 5:00 PM if needed.

The Stamp is 2-8-1 in the eleven game series between the two teams this season but look to make a statement that the playoffs are a whole different story. The Stamp have been playing their best hockey as of late and feel they have a good chance of upsetting the divisional leaders this weekend and moving onto the “Fraser Cup” which takes place March 27-31 in Woodrige IL.

The Stampede made their way to the division finals by defeating the 3rd place Skyland’s Kings last weekend in Skylands in game three of the semi-final round by a score of 3-0. The Stamp won game one 4-2 and the Kings took game two 4-0 both of those games were in Oswego at “The Fort”

The Stampede are asking their fans to make the trip down to Binghamton this weekend to support the team but if you can’t make the quick trip to Bingo you can still catch all the action live on hockeytv.com